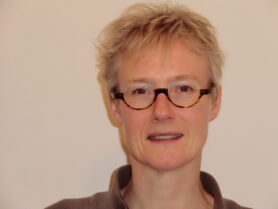 Annemie Halsema is Associate Professor at the Department of Philosophy, Vrije Universiteit Amsterdam. Her research project is entitled: ‘Hermeneutics of the gendered, racialized and ageing body’. Most philosophical theories about personal identity take embodiment into account but do not consider social situatedness. Dr. Halsema wants to philosophically understand what embodied factors such as gender, race and age imply, both in terms of a person’s personal identity and in terms of being socially signified.
She wrote two books on Luce Irigaray, Dialectiek van de seksuele differentie (1998) and Luce Irigaray and Horizontal Transcendence (2010), co-edited several books, among which Feminist Explorations of Paul Ricoeur’s Philosophy (2016). Another co-edited volume will appear in 2021, Bodies That Still Matter. Resonances of the Work of Judith Butler.