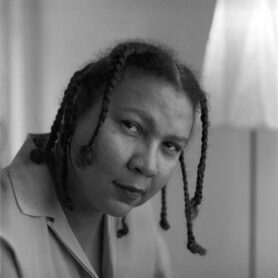 “ Well, I think we always have to recognise that we can’t just expect the 6 weeks I spent in Utrecht as the first guest-professor in black feminist theory to be the moment of transformation. All these 6 weeks of bell hooks being in Utrecht is a moment of beginning”, says bell hooks in an interview with Helma Lutz in 1992 (WSIF, vol 16, nr 4, 1993).

The interview was conducted at the occasion of bell hooks’ appointment as a Belle van Zuylen professor at what was then called the department of Women’s Studies in the Arts at Utrecht University. bell hooks (1952-2021) then was an upcoming  and pioneering feminist scholar, one of the first academics to focus on the representation and reproduction of cultural images of blackness and gender in contemporary cultural discourses including movies, music and literature. Her then recent publication Yearning, Race, Gender and Cultural Politics (1990) made her the perfect guest-professor for the young ambitious Women’s Studies Programme in the Arts.
Following her own definition, it might be comforting to think about bell hooks and the impact of her work as a moment of beginning. At least she epitomized this new beginning for us as feminist scholars in the process of building a new programme and while doing so being fully aware of the necessity to engage with critical race and whiteness studies as well as with intersectional analysis.
As our colleague Yasmin Gunaratnam wrote in a tribute to bell hooks: “bell hooks will continue to incite new generations, enthralled and captivated by her passion and earthing of complex political and theoretical debates and conundrums from pedagogy, to black masculinities to the damage done to girls and young women by visual cultures. hooks told us that we need maps to find our way towards love. We thank her for her companionship and guidance along the way.”