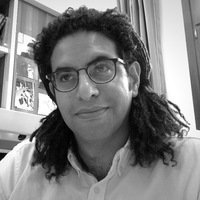 The Netherlands Research School of Gender Studies in cooperation with her partners organises the nineteenth round of the DOING GENDER Lecture Series. These lectures stress the importance of doing gender work combined with an active involvement in the practice of gender theory and research. The concept of DOING GENDER supports a hands-on approach to gender issues in the sense of social and political engagement with the new forms of gender inequalities that are taking shape in the world today. The lecture series wants to give space to the new generations of gender theorists and practitioners and to perspectives that innovate the field and do gender in new ways. Key is the notion of doing gender: what is the state of the art definition of gender? How do contemporary scholars and activists utilise this definition?

On Monday November 5, 2018 Ramy Aly will give a Doing Gender Lecture on Epistemological Unruliness and Theoretical Cannibalism: Queer Theory and Racial Performativity.

During this lecture I will share some of the ways in which queer theory and in particular queer epistemology helped me to elaborate a performative reading of race and racialisation among British-Arabs in London. Queer epistemology provides the ground upon which we can critique institutionalised processes of ‘normalisation’ and identity politics,  yet a whole hearted embrace of queer epistemology that sees its transformative potential stand-for but also stand-for-more-than gender and sexuality studies remains contentious. It may be a gesture too far to make queer theory synonymous with critical theory and in the process strip it of its disciplinary home, yet such acts of theoretical cannibalism and epistemological unruliness seem to be at the heart of queer epistemology. In a retrospective I wish to take stock of the often (unrecognised) ways in which queer theory played a role in the way that I sought to counter-expose the ethnonormative norms of ‘being raced’ (making and being made an ‘Arab’) and the heteronormative norms of being gendered (making and being made into an ‘Arab wo/man’) in London.

Ramy Aly is Assistant Professor of Anthropology at the American University in Cairo. Before coming to AUC he taught anthropology at the University of Sussex (UK) where he received his PhD in social anthropology in 2011. Ramy’s research interests and publications engage with the anthropology of ethnicity, migration and diaspora; anthropology and media studies; militarism, cultural studies and youth cultures. He is the author of Becoming Arab in London: Performativity and the Undoing of Identity (2015 Pluto Press), the first ethnographic account of the gender, race and class practices among British-born and raised Arabs in London. Ramy also holds a BA in Law with American Studies (University of Sussex, 1995), an MA in Middle East Politics (University of Exeter, 2000), and an MSc in Comparative and Cross-Cultural Research Methods (University of Sussex, 2011). He is a member of the Royal Anthropological Institute (UK) and The European Association of Social Anthropologist.