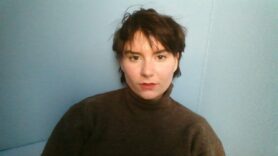 Lou Mousset is a PhD candidate in the Department of Sociology at the University of Amsterdam and Université Paris 8. Her PhD project is part of the larger NWO-VICI project EnGendering Europe’s Muslim Question. The working title of her research is Politics of decline; gender, race and the death of France and attempts to further theorize the systemic problematization of Muslims in France by focusing on the pervasiveness of the narrative of national decline. Although ‘decline’ commonly refers to a movement towards an end, the production of discourses of national decline seems to be never ending. In recent years, the dark tell of national decline has been reiterated at the top of the book chart by media figures who link the ‘end of France’ to its impending Islamization.
This research proposes to critically explore this discourse of national decline by contextualizing it as part of a longer genealogy where the Nation of France is enacted by the construction of its enemy, on grounds that are conjointly civilizational and sexual. The project is supervised by prof. dr. Sarah Bracke (UVA) and prof. dr. Nacira Guénif Souilamas (Paris 8).