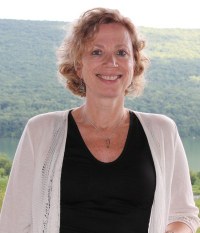 In the spring of 2015 the Netherlands Research School of Gender Studies in cooperation with the Graduate Gender Programme (GGeP) at Utrecht University organises the fourteenth round of the DOING GENDER Lecture Series. These lectures stress the importance of doing gender work combined with an active involvement in the practice of gender theory and research. The concept of DOING GENDER supports a hands-on approach to gender issues in the sense of social and political engagement with the new forms of gender inequalities that are taking shape in the world today. The lecture series wants to give space to the new generations of gender theorists and practitioners and to perspectives that innovate the field and do gender in new ways. Key is the notion of doing gender: what is the state of the art definition of gender? How do contemporary scholars and activists utilise this definition?

On Wednesday May 27, 2015 Dr. Jennifer Wagner-Lawlor will give a Doing Gender Lecture on ‘Becoming Plastic: Plaesthetics, the Matrix and Hospitality‘.

In a recent essay, Jennifer Wagner-Lawlor explores the entanglements of “plastic” (the material) and “plasticity” (the concept) taken up by Roland Barthes’ Mythologies (1957), and later in Catherine Malabou’s What Should We Do With Our Brain (2008), in which her longtime research into plasticity is extended to neuroplasticity. Wagner-Lawlor’s commentary in “Becoming Plastic: Plasticity, Freedom, and the Work of Art” (available as “Becoming Plastic I” for advance reading) is most concerned with myth, ideology, and aesthetics. But it also exposes a profoundly masculinist notion of creativity and becoming that eclipses the role of the maternal. This lecture extends Wagner-Lawlor’s initial exploration by thinking about plasticity in relation to what Irina Aristarkhova describes as the “matrixial.” Rethinking plastic and plasticity “through the matrix” clarifies what is at stake in the question of plastic/ity: not the privileging of either a masculine/masculinist or a feminine/feminist myth of creativity and idealist aesthetics, but the embracing of a radical (queer) aesthetics of difference; Wagner-Lawlor calls this aesthetics of becoming pla(e)stethics. Finally, thinking plasticity through the matrix invites us to consider the notion of hospitality, and Malabou’s interesting, and undeveloped, remark that “[because] plastic never presents itself without form, plastic is always thought as a factor of identification, standardisation, globalisation, and never as a possible welcome of the other.”

Jennifer Wagner Lawlor specializes in utopian and speculative literature – with a focus on feminist utopianism. Her publications deal primarily with contemporary women’s literature though she began her career teaching and writing about nineteenth-century British literature. Her most recent book, Postmodern Utopias and Feminist Fictions, appeared in August 2013 from Cambridge University Press. Her current research looks at the intersection of literature, philosophy and the environment, particularly the literature of climate change. She is also working on a project on the concept of plasticity, in the context of contemporary studies of cognition, and in the more literal context of plastics in our environment.

The Doing Gender Lecture Series (flyer) takes place in Utrecht and is free of charge. Registration is not compulsory, but highly appreciated: nog@uu.nl or 030 – 253 6001.