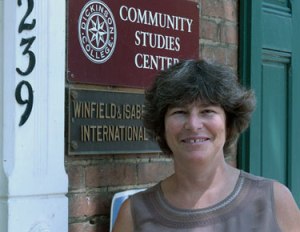 On Tuesday September 20, 2016, Professor Susan Rose will give a Doing Gender Lecture on ‘Telling Lives: Gender Violence and the Global Clothesline Project.‘

The Global Clothesline Project (GCP): Bearing Witness to Violence Against Women is part of the international movement against violence directed at women. The GCP invites women to create T-shirts that express the violence they suffered and the healing they have experienced. The effectiveness of the project lies in the work that can be done at an individual or small group therapeutic level (anonymously or confidentially as women may individually or collectively create T-Shirts), and at the social movement level with the public display of shirts that expose the violence and healing that has taken place within a particular community – be it a university campus, NGO, or local community. The exhibit has the potential to open up a dialogue about violence and to engage victim-survivors, witnesses, and perpetrators to “see” what impact violence has and work towards ending it. A powerful tool to educate the community about the impact of gender violence, it provides both agency and safety to vulnerable victims. It empowers survivors and allies to come together to not only express individual stories but also to collectively challenge human rights violations that are often constructed and dismissed as traditional cultural practices. This presentation will offer a qualitative and comparative analysis of women’s experiences of violence, healing, and action across cultures. It examines the relationship between gender inequality and gender violence, and the health impacts of gender violence as the most pervasive human rights violation that affects women and children today across both the developed and developing world.
In the process of breaking silence through images and words, survivors are not only finding their own voices, they are also collectively creating new narratives that challenge the individual and collective denial of abuse and the reproduction of violence. As contributors are constructing oppositional narratives that challenge traditional narrative, they often encounter skepticism and resistance to the telling of their stories for speaking out is a political as well as a therapeutic act, and as such, is a claim to power. As Milan Kundera writes in The Book of Laughter and Forgetting, ‘Man’s struggle against power is the struggle of memory against forgetting.’

Susan D. Rose is a Charles A. Dana Professor of Sociology and Director of the Community Studies Center at Dickinson college (USA). Professor Rose specializes in the sociology of religion, family, and education; violence; indigenous studies; and inequality, race, class, and gender studies. She uses a comparative (cross-cultural and historical) approach to the study of family, sexuality, religion, education, migration, and violence. She has conducted fieldwork in the United States, Guatemala, the Philippines, and South Korea on evangelical movements, education, and gender that has resulted in a number of articles and books. These include: Challenging Global Gender Violence: The Global Clothesline Project (Palgrave, 2013); Exporting the American Gospel: Global Christian Fundamentalism (Routledge, 1998) and Keeping Them Out of the Hands of Satan: Christian Schooling in America (Routledge, 1986; 2017). Her recent work explores sexuality education and gender-based violence in Cameroon, Cuba, Denmark, Italy, the Netherlands, Venezuela, and the United States; the impact of the Religious Right on social policy in the United States, and Indigenous Studies: The Carlisle Indian Industrial School: Indigenous Histories, Memories, and Reclamations (University of Nebraska Press, 2016).

After the Doing Gender Lecture professor Rose will be present at the PCI film screening in the evening of Tuesday September 20, 19.15-21.30 hrs. Drift 21, room 0.32

Film screening:
The Lost Ones: Long Journey Home is a documentary film that weaves together Native American oral histories and historical, archival research as it pieces together the story of two Lipan Apache children captured along the Texas-Mexican border in 1877. After the massacre of their village known, as Remolino or the “Day of Screams,” the children rode from fort to fort with the U.S. Calvary for three years before being taken to the Carlisle Indian Industrial School (CIIS) in Pennsylvania – thousands of miles from their home. Carlisle, established in 1879 at the end of the “Indian wars,” served as the model for off-reservation boarding schools across the United States and Canada. Its goal was to “civilize” and assimilate Indian children to Euro-American culture: “education for extinction.” The children’s ties with their family were completely severed; the only legacy the children left was Kesetta’s three-year-old son who became the youngest child ever to be enrolled at CIIS. While the family remembered the Lost Ones every year, they never knew what had happened to the children or where they were buried until two centuries later. This documentary reveals the mystery of how on the 132th anniversary of Remolino, Lipan Apache descendants from California, Texas, and New Mexico came to Carlisle to offer blessings so the children could be sent home. The film demonstrates the power of collective memory, the impact of intergenerational trauma, and the ways in which photographs can be used as a form of both erasure and reclamation.